Each installment of this series will focus on a different instrument and provide you with links to relevant video examples of industry-leading engineers demonstrating these techniques.

This week, we’ll be taking a look at the instrument that metal and rock are famous for: 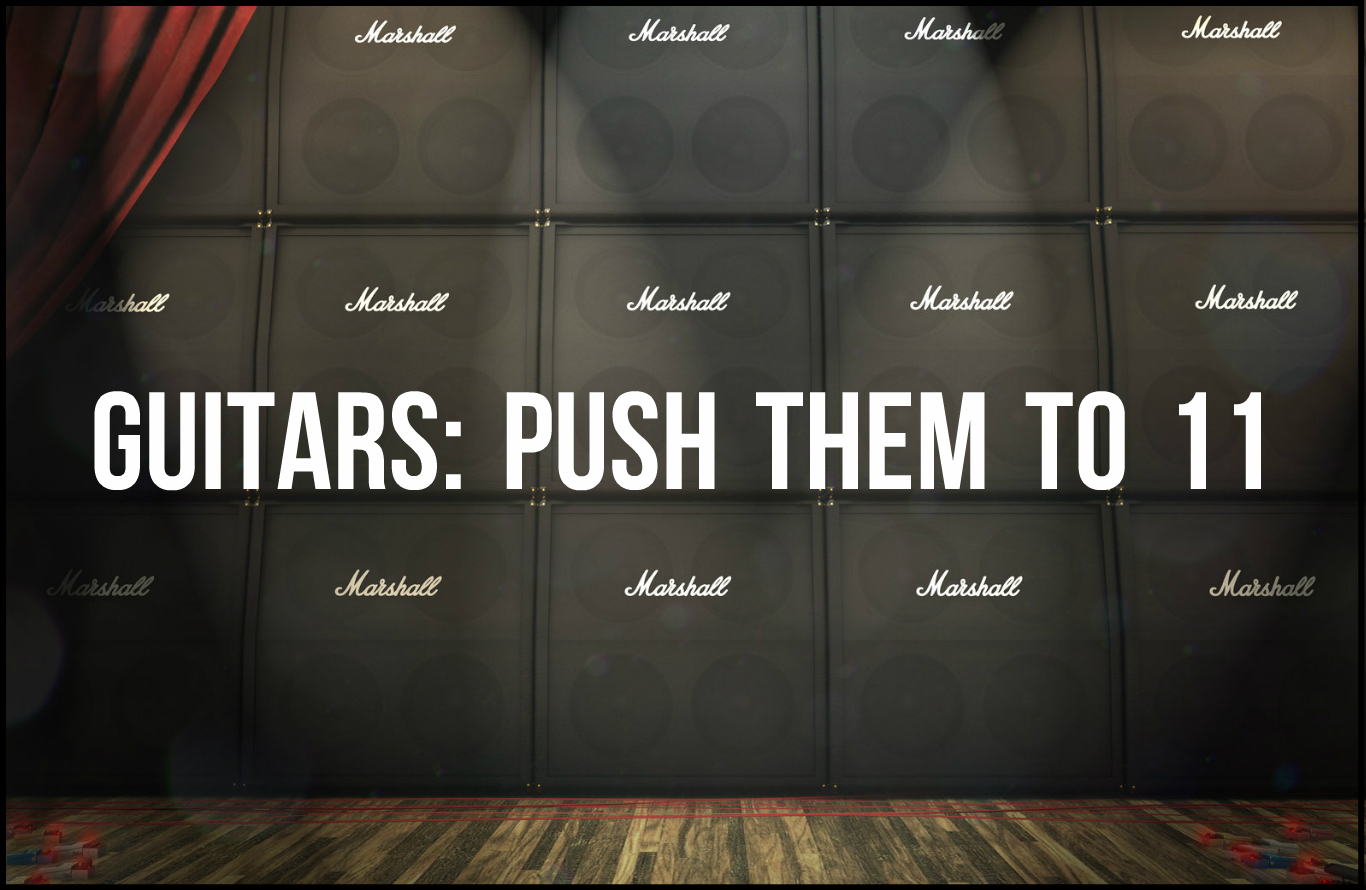 An instrument which rock and metal engineers (and fans) take a lot of pride in and often spend countless hours obsessing over is the Electric Guitar. For this very reason, it’s crucial that your guitar sounds live up to what’s expected from a great metal production.

In this Blog we’ll take a look at some of the many mixing tricks we can use in order to a achieve an aggressive, clear, and powerful Electric Guitar sound that’ll help win over a heavy audience: A common mistake which a lot of newer engineers tend to make when dialing in guitar tones is using the wrong Speaker Cabinet & Microphone setup in the first place.

NOTE: In this case, I’m primarily talking about in-the-box guitar tones. The following principles DO apply to both in-the-box & out-of-the-box situations, however switching between speaker & mic variations in real world is a much longer and more tedious process that requires some serious experimentation.

Impulse Responses Are A Blessing!

The various speakers, cabinets, microphones, and placements that were used in its creation all play a significant part in an impulse response’s final sound. When it comes to forging a digital guitar tone, simply trying out a different Speaker IR can get you much closer to the sound you’re after than trying to EQ your way there. The fact that current digital recording technology allows us to change multiple parameters with a single click is simply phenomenal!

How Do I Pick The Right IR?

The main downside to having the ability to change IR’s so easily is the fact that there are so many options to choose from:

NOTE: Check out my “Recording Guitars” URM Series from a few months back for a detailed guide on choosing the right Impulse Responses:

NOTE: It’s important to remember that having too many options can be just as harmful as not having enough. My advice is to do some shoot-outs between various IR packs and try to narrow it down to a manageable number of go-to impulses which cover a broad range of tonal variations. A key technique to making your guitars sound present and aggressive within a dense mix is to use layered compression.

Distorted guitars don’t take kindly to large amounts of compression due to the fact that they are already fairly clipped. For this reason it’s often a better idea to give them layers of subtle dynamic control in several stages instead of pummeling them with a single dynamics processor.

Let’s take a look at the various layers of dynamic control we can utilise in order to cement our guitars firmly in place:

It’s not uncommon for the low-mids in an electric guitar track to jump out unnaturally within certain playing styles or particular sections. While most beginner engineers would usually reach for an EQ to resolve this issue, a more dynamic and natural-sounding solution is to address the problem area with a multi-band compressor: NOTE: This type of low-end “jumpiness” usually isn’t constant throughout the entire song, and most prominently occurs in chuggy/palm-muted sections. For this reason, using an EQ to remove these frequencies can often lead to the guitars sounding thin.

Check Out This Video of Joey Sturgis Demonstrating Multi-Band Compression on Electric Guitars:

A great way of adding an extra layer of control and subtle pick-attack enhancement to your guitar sound is applying some buss compression across your guitar stereo group: Another cool technique to help maintain a constant overall volume balance for your guitars within the mix is limiting: Waves’ L1 Is A Favourite For Most Limiting Applications Using filters to roll-off any unnecessary low-end “rumble” or high-end “fizz” is common practice on guitars… But are you getting the most out of your filters?

“But filtering is simple…”

Although filtering might seem like a simple, no-brainer process that we often skim over rather quickly, there are a few cool tricks we can use in order to sweeten and “perfect” our filters so that less processing is required later on.

Here Are A Few Things To Consider While Filtering Guitars:

The “Q”, or resonance control of a filter determines how steep or smooth the initial frequency roll-off is:

Check out this quick and simple demonstration of how filter resonance works by Wickiemedia:

The severity of the slopes you use while filtering have a huge impact on how natural they sound: Heavy metal is often associated with cranking the gain to the max. The truth is, there comes a point where less is actually more while setting the gain for a brutally heavy rhythm tone…

Glenn Fricker Dials in A Metal Guitar Tone On A Peavey 5150:

Let’s take a quick look at a few of the downsides to using too much gain while dialing in a metal/rock guitar tone:

Check out this video in which CSGuitars Explains and Demonstrates the drawbacks of using TOO MUCH GAIN:

It’s important to note that the EQ’ing route you choose to go down when processing will dictate whether or not you’ll need to address certain frequency bands in a specific way. Keep this in mind when EQ’ing, as you don’t necessarily NEED to mess with EVERY SINGLE frequency band just because I’ve told you about it.

Example: If you’re boosting a lot of high and low-end then you won’t need to remove as much mid-range, and vice versa…

Here are some of the general areas to look at while EQ’ing Guitars:

Note: Take these numbers as general guidelines, not as hard and fast rules! The exact frequencies you’ll need to boost/cut will vary greatly from track to track due to the sheer amount of variables involved in the recording process. Always make sure to sweep around and fish for the areas which complement the sound best!

NOTE: Try not to go crazy with this procedure, as each cut you make will evidently make another frequency stick out. Cutting out 1-2 of the most obvious “rings” is usually enough.

Check out this video by Joel Wanasek for a great example of boosting high-end on guitars:

It’s important to realise that the tips I’ve mentioned in this article are designed to help you make a good tone sound even better. If your core tone or performance is weak, then no amount of “fix it in the mix” will suffice.

Great guitar tone isn’t something you can just pull out of thin air. It requires proper attention to detail at every step of the recording process.

Make sure to put the right amount of time and effort into mastering the art of guitar production, as NAILING the guitars is one of the most important things you can do towards crafting an awesome rock/metal mix!

This concludes “Mixing Secrets – Guitars.” I hope that this article has given you some new ideas to try out during your next project. Be sure to comment below if any of this information has helped you out, or if you have any questions.